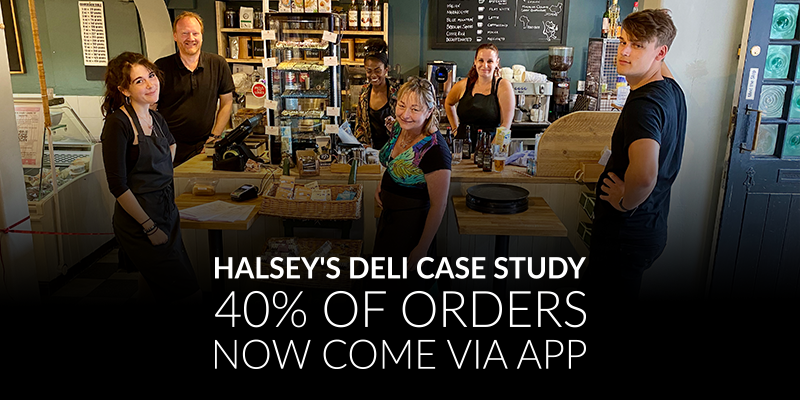 Halsey’s Deli and Eatery has a history that goes back to 1854. With a track record of adapting to new times, the company recently decided it was time to invest in an app. This resulted in 400 downloads in just six weeks, and now 40% of all orders come through the app.

Halsey’s wanted to introduce a takeaway service to increase reach and bring in more orders. Initially the business relied on passers-by, but it wanted more sales and the owners knew a more innovative solution was needed. This was when they started looking at mobile options.

The company soon realized an aggregator app was not for them. Halsey’s has strong branding and is proud of its reputation for quality in the local area, so it needed a product that would give control over its service and how the brand is portrayed.

The owners have a website built with Squarespace, so they know the power of white-label platforms to enable businesses like theirs to create digital assets cost effectively. They decided that a similar platform for mobile apps would fit their needs.

App Published in Under a Week, Followed by an Unexpected Opportunity

Using an app, customers can order food from their phone and then pick it up when it’s ready. When an order is made, the kitchen is notified via a connected printer to ensure nothing is missed.

The owner was also happy to see how easy it was to build the app and add their own branding. Despite having no app development experience, they were able to create and publish the app in just a few days.

As Halsey’s app was already up and running, the deli was able to quickly add table service functionality. This let the business take full advantage of the unexpected opportunity.

Since its release, the app has become critical to the business. It has helped increase the deli’s customer base and is now responsible for processing 40% of all orders.

Halsey’s Deli Is Happy to Have Full Control

“It took less than two days to scope, design and create the initial web app and then a couple of days to go live. We now receive about 40% of food and drink orders via the app, and we are seeing excellent levels of footfall and a steady increase in repeat business.”